Brandi Oswald of the NA posted:

Civil War maps are always popular at the National Archives, and the Cartographic Branch is pleased to announce the digitization of over 100 Confederate maps from Record Group (RG) 109.  All are now available to view or download through our online catalog.
Maps played a very important role during the Civil War. They were instrumental to leaders and generals for planning battles, campaigns, and marches. As a result, thousands of maps relating to the Civil War were created, many of which are held by the Cartographic Branch in a variety of record groups. These maps can include rough sketches created quickly before or during a battle, but can also include maps that were drawn to accompany official reports or even post-war publications. Many are highly detailed and colorized. Civil War maps frequently show topography, ground cover, roads, railroads, homes, the names of residents, towns, and waterways. They can be very helpful to better understand what the land looked like and how it was used during the Civil War era. Maps showing the names of residents can also be helpful to genealogists.
The Civil War maps we are featuring today are all Confederate maps. These maps were captured by or surrendered to the United States at the conclusion of the Civil War, or were later donated to the National Archives by former Confederate leaders. The maps cover areas in the states of Alabama, Arkansas, Georgia, Kentucky, Maryland, Mississippi, Missouri, Oklahoma (Indian Territory), South Carolina, Tennessee, Texas, and Virginia. There is also a grouping of miscellaneous maps that show more than one state, which are filed as "US." Most of the maps are manuscripts, although some are printed maps or even copies of maps. Many of the printed maps are annotated to show troop movements, battles lines, or other important features.
Many of the maps show well known battlefields and locations, such as Shiloh, Antietam, Murfreesboro (Stones River), Richmond, Petersburg, Atlanta, Knoxville, Manassas (Bull Run) and others. A number of maps show the battlefield at Shiloh, which was fought April 2-3, 1862 in southern Tennessee. 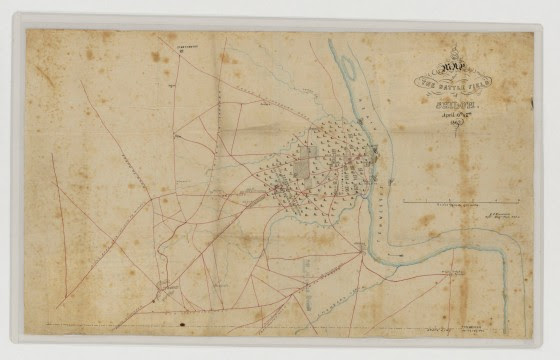 Map of Shiloh Battlefield. TN-11.
Many maps also cover lesser known but also very important locations, such as Corinth, Mississippi, the location of a strategic railroad junction and site of a siege and battle. Other lesser known battles with maps in the series include Cross Keys, VA, Prairie Grove, AR, and scores of others. 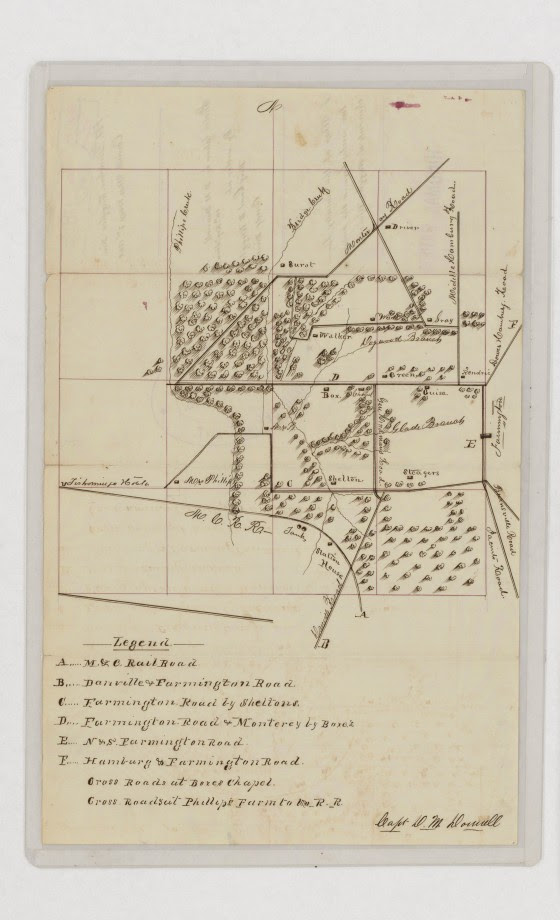 Sketch of the Vicinity of Corinth, Mississippi. MS-5
The series also includes maps and plans of fortifications, including those that protected Charleston, South Carolina, Vicksburg, Mississippi, and Beaufort, South Carolina. Some fort plans are even included, such as a plan for Fort Waul in Texas and Fort Beauregard in South Carolina (SC-3A), although most of the Cartographic Branch's fort plans and drawings can be found within RG 77 in the Fortifications File and Miscellaneous Forts File.
Posted by blogger01 at 12:56:00 PM

We're here for you!

You can search for any post ever added to this blog (and there have been more than 5,000 so far) by using the search box in the upper left corner on this page!

Registration is OPEN for the 2018 Annual MoSGA Conference on August 10-11, 2018! Please go to MoSGA.org for details and to register.

MoSGA now has an online book store! You can choose from items in these categories: genealogy, American history, Missouriana, and genealogy software. Why not take a look today?


We are the Missouri State Genealogical Association. You can find out more about our events and publications, including our big annual conference, and learn how to join our association on our website!

Posts and images appearing on this weblog are copyright © 2007-2018 by Missouri State Genealogical Association unless otherwise stated. Permission is granted to reprint posts from MoSGA Messenger provided you include the following statement with each reprinted post:


You can send comments about this weblog and news items of interest to Missouri genealogists here.